Are you tired of getting on and off the stock-trading carousel and just want to stand pat for a change? You’re not alone. And that’s not a problem. Despite what some headlines might suggest, buying and holding is still a smart strategy.

Here’s a rundown of three great value stocks you can comfortably sit on for years, racking up healthy gains by leaving them alone.

Rumors of the personal computer’s death have been greatly exaggerated. While the industry may never relive its go-go years of the 1990s, corporations as well as consumers still need PCs to do what smartphones and tablets can’t. While a 2022 lull is in the cards following this year’s swell of purchases, technology market research outfit IDC estimates the world will see some slight growth in the number of PCs shipped between 2023 and 2025.

HP is the familiar go-to name to play this slow and steady trend, but it may not be the best one. That honor arguably belongs to Dell Technologies (NYSE:DELL), which has consistently led its peers this year in terms of PC sales growth despite the chip shortage. IDC reports that Dell’s third-quarter computer deliveries were up 26.6% year over year vs. the industrywide average increase of 3.9%. And that’s even better than its second-quarter 18.6% increase. In fact, the company has seen more consistent sales growth than its peers and rivals since the pandemic took hold last year.

Dell is able to shrug off supply-chain problems because it’s made a point of digitizing its resource planning and simplifying its PC designs in a way that limits the total number of different components the company requires.

What’s amazing — and compelling — is that the market’s allowed Dell shares to trade currently at only 7.6 times next year’s projected per-share profits.

Speaking of cheap stocks, check out Gilead Sciences (NASDAQ:GILD). The drugmaker’s shares are currently valued at only 12 times the company’s trailing-12-month earnings — and an even lower 10 times 2022’s estimated per-share bottom line.

Gilead Sciences is best-known for its HIV/AIDS treatment, Biktarvy, although hepatitis is also in its wheelhouse. It’s even got a small hand in the oncology market with Tecartus and Yescarta, both of which treat lymphoma. Then there’s the pipeline, which is currently 45 clinical trials strong, 17 of which are in phase 2 or phase 3 of their testing. Most of these trials aim to expand the approved uses of the company’s existing proven drugs.

A handful of the late-stage trials, however, address inflammatory and fibrotic diseases. These represent additional revenue opportunities that will bolster its flagship HIV business, which isn’t going away anytime soon but is expected to be slow. Consensus projections suggest it will grow on the order of 3% to 6% annually at least through 2027.

The kicker: Any newcomers stepping into a Gilead position today will be collecting annual dividends amounting to just under 4% of their purchase price. That’s not a bad chunk of change to tack onto any potential long-term capital appreciation ahead.

Finally, add Tyson Foods (NYSE:TSN) to your list of value stocks to buy if you’ve got an extra $5,000 ready to put to work.

Yes, food companies appear to be at ground zero of inflation’s devastating impact. Not only are wholesale chicken costs up nearly 50% from a year ago, the 30% increase in fuel prices is causing delivery costs to soar as well. Tyson has already announced price increases a couple of times this year, including a 13% price hike just last month. 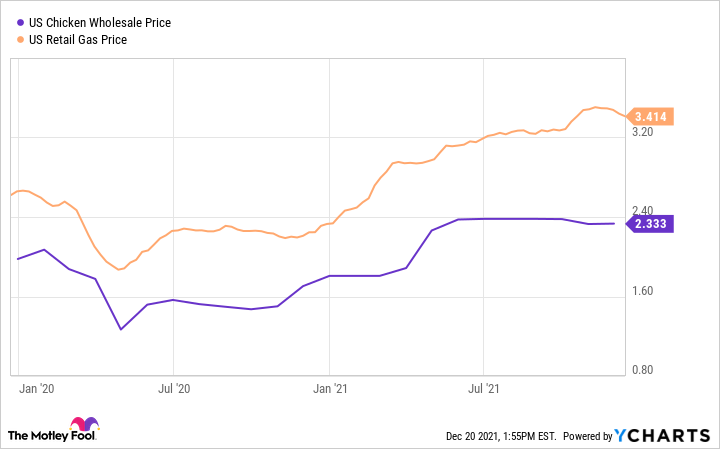 Largely lost in the lamentations, however, is the fact that food producers like Tyson are consistently capable of raising their prices. Consumers may not like paying more for a meal, but the majority of them still find a way of doing so. After all, everyone has to eat something. That’s why Tyson is projecting production volume growth of 2% to 3% in 2022 despite what will likely be persistently higher prices and costs.

To this end, veteran market watchers may recall that these swells of inflation come and go, each one temporarily rattling investors as well as consumers — but they also eventually abate. Inflation is typically self-adjusting.

In the meantime, Tyson plans on curbing these costs, both in the near-term and long-term. Earlier this month, the company announced it will spend $1.3 billion on automation over the next three years, which should drive its production costs down regardless of rising supply and freight costs. All told, Tyson aims to save $1 billion per year by 2024 as a result of its modernization efforts.

At Tyson’s current share price, you can buy into that evolution for only 11 times next year’s estimated earnings.

Record Highs This Year As Inflation Begins to Cool